Kubernetes from the Ground Up: Server Components

Add orchestration to your containerisation

In the previous post, Choosing a configuration method, we looked at the three ways in which a Kubernetes cluster can be configured. In this post we’ll go through the components which make up the cluster.

Kubernetes clusters have two types of servers: masters and nodes. The masters provide the control plane for the cluster while the nodes take care of the workloads. As you probably guessed, having one or more of either provides high availability.

The components documentation gives us a great rundown on the components that make up each of these two nodes, though it might be a little confusing for those who are just starting out. In this post we’ll look through each component’s documentation while adding additional information as required. Furthermore, to help really get the point across, we’ll build a diagram to show where each component resides.

Before covering the master’s and node’s components though, it’s worth covering kubectl first. From the kubectl documentation:

Use the Kubernetes command-line tool, kubectl, to deploy and manage applications on Kubernetes. Using kubectl, you can inspect cluster resources; create, delete, and update components; and look at your new cluster and bring up example apps.

OK great, kubectl is used to administer our Kubernetes cluster. Let’s see what that looks like:

Master components provide the cluster’s control plane. Master components make global decisions about the cluster (for example, scheduling), and detecting and responding to cluster events (starting up a new pod when a replication controller’s ‘replicas’ field is unsatisfied).

This is what we’d expect from the role which provides the control plane, but it’s useful information nevertheless.

It is designed to scale horizontally – that is, it scales by deploying more instances.

kube-apiserver is the front door to our Kubernetes cluster. As it is horizontally scalable, it enables us to have multiple masters in our cluster.

Always have a backup plan for etcd’s data for your Kubernetes cluster.

This one is self explanatory - Kubernetes uses etcd to store cluster data. Note that as per the diagram below, the database is stored outside of the cluster. 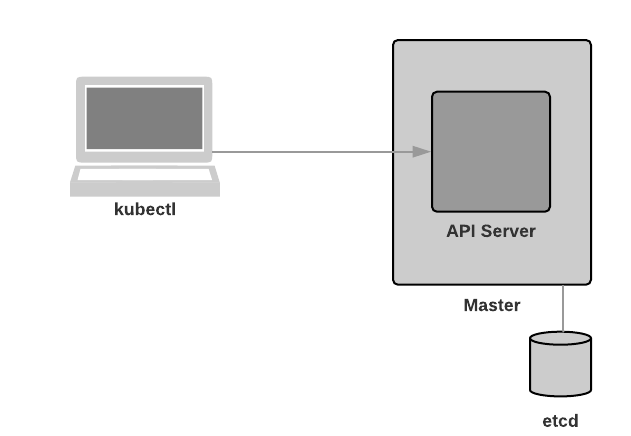 Component on the master that watches newly created pods that have no node assigned, and selects a node for them to run on.

OK, this one introduces a few terms we haven’t yet covered, so let’s touch on them now and delve deeper into them in a subsequent post. 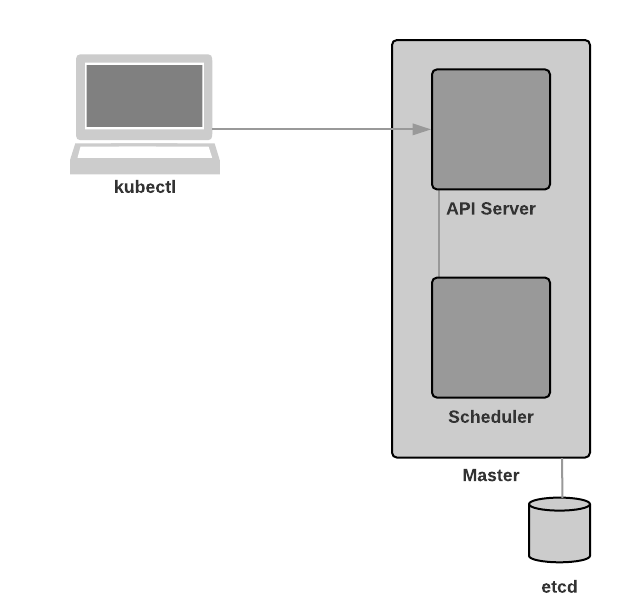 Component on the master that runs controllers. (Controllers are a control loop that watches the shared state of the cluster through the apiserver and makes changes attempting to move the current state towards the desired state.)

Logically, each controller is a separate process, but to reduce complexity, they are all compiled into a single binary and run in a single process.

In a nutshell, we use kubectl to configure our Kubernetes cluster. The kubectl commands we run hit our kube-apiserver. Our kube-controller-manager watches the API server for changes and does what is required in order to fulfill them.

Note: We’ll delve into replication, endpoints, accounts and tokens later on in this series. 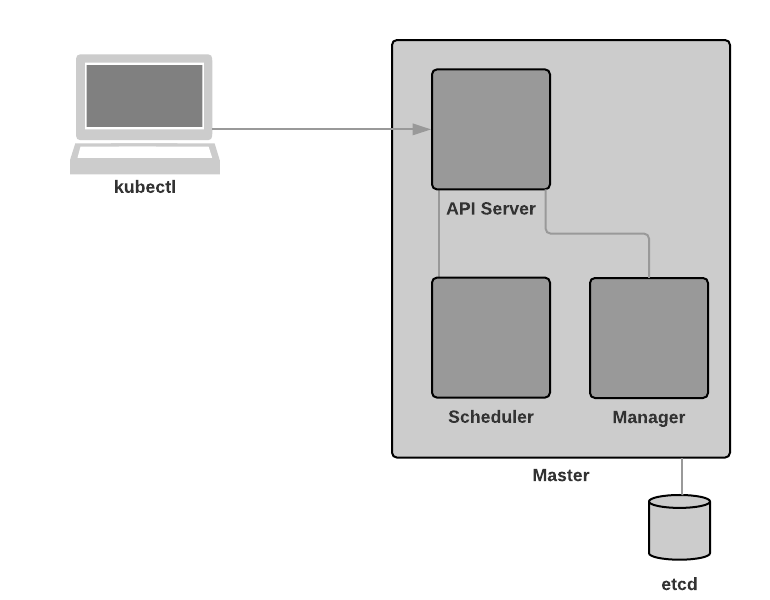 More information on the Cloud Controller can be found here.

That brings us to the end of the master components. Before we move onto the node components, let’s quickly recap what we’ve just learned:

There’s nothing more to add to that really.

The container runtime is the software that is responsible for running containers. Kubernetes supports several runtimes: Docker, rkt, runc and any OCI runtime-spec implementation.

At the time of writing, Docker is the most popular container runtime. Therefore it will be used throughout this series.

An agent that runs on each node in the cluster. It makes sure that containers are running in a pod.

The kubelet takes a set of PodSpecs that are provided through various mechanisms and ensures that the containers described in those PodSpecs are running and healthy. The kubelet doesn’t manage containers which were not created by Kubernetes.

PodSpecs are specifications of Kubernetes pods that you want created. If you’re interested in the details, they’re define using the “pod core” and “PodSpec core” APIs, among others. However, don’t worry if it doesn’t make sense to you now, we’ll delve into the Kubernetes APIs later.

Note: If you’re really keen to jump in, I suggest you look into spinning up pods using Deployments, Jobs and/or StatefulSets instead of spinning up pods directly. Again though, don’t worry if this doesn’t make sense to you, we’ll go through this all in future posts.

The above quote from the documentation is telling us that the API server sends instructions to kubelet. These instructions contain information (specifications) on pods which are to be spun up on the particular Node which is receiving the instructions.

Note that it is also kubelet’s responsibility to ensure that these pods are healthy. 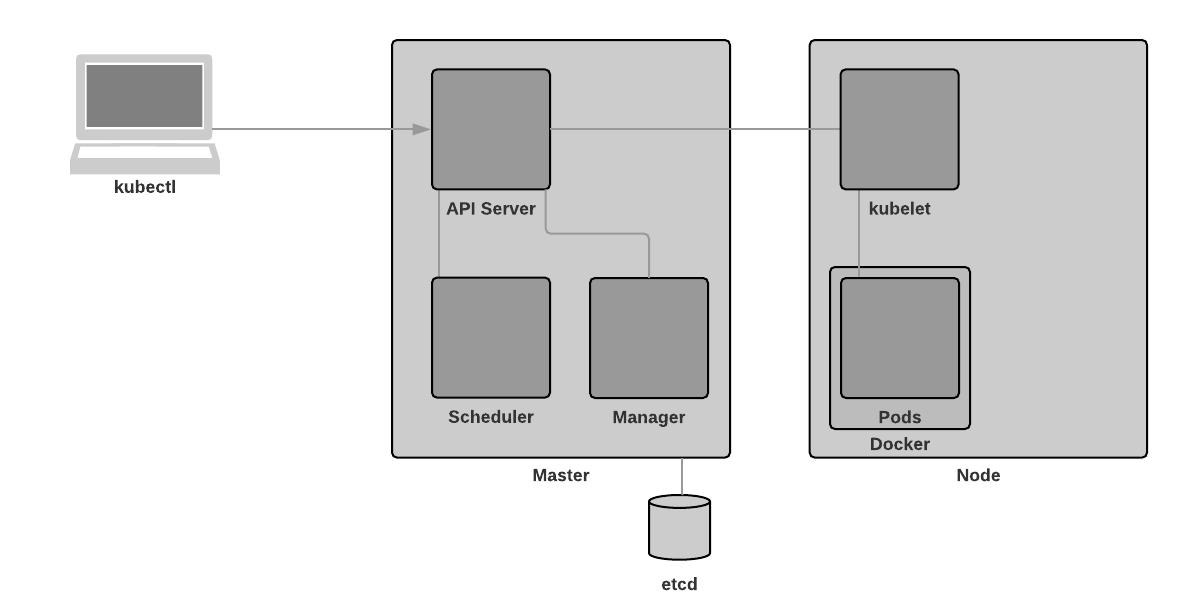 In the DevOps: The Evolution of Applications post, it was mentioned that orchestrators such as Kubernetes “look at a container’s requirements and place them on a host which has enough resources to satisfy its needs”.  And, as per the kube-scheduler section above, _“Component on the master that watches newly created pods that have no node assigned, and selects a node for them to run on.”_That’s great, but how do we find a pod when we don’t know which node it resides? We use services and kube-proxy. We’ll cover services in a later post and will focus on kube-proxy for now.

Using iptables, kube-proxy is able to forward connections between Nodes. In doing so, we can ensure that our traffic will always find the Node(s) which contain the pod(s) we’re looking for. An additional benefit of this connection forwarding is that it provides us with transparent and automated load balancing.

That’s right! No physical or virtual load balancers. No in-path deployments. No complex redirection rules or configuration. It is done completely transparently. We simply spin up two or more pods, and Kubernets handles the rest. That’s pretty neat, isn’t it?

If you’re interested in how the communications work between Master(s) and Node(s), the aptly named Master-Node communication document is a great read.